Two awards were given at this year’s luncheon.  Each award recipient receives a plaque and a certificate, and a $100 donation is made to the National MFSA Office in the name of the honoree(s).

The Building a Just Community Achievement Award for Justice recognizes congregations that have made a substantial contribution to creating a more just community.  This year, MFSA recognized one congregation for becoming affiliated with the Reconciling Ministries Network.  A Reconciling Community is one which makes space at the table for all God’s children by explicitly welcoming lesbian, gay, bisexual and transgender people and striving to transform the church into a full expression of Christ’s inclusive love. This year’s recipient of the Building a Just Community Congregational award is Saint John’s UMC – Austin.

Members of Saint John’s UMC Austin were presented with the Building a Just Community Achievement Award for Justice in recognition of their commitment to full inclusion in the UMC and the world, and for their actions this year to affiliate with the Reconciling Ministries Network. Twenty-six members of the Saint John’s congregation were in attendance. Rev. Paul Escamilla accepted the award for Saint John’s. http://stjohnsaustin.org/content.cfm?id=531

The Genesis Award recognizes groups or individuals who have recently begun a journey creating a more just community, and who have made an outstanding contribution. 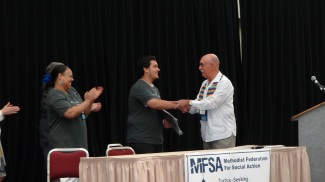 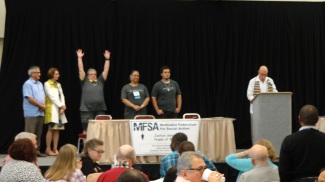